Dr. Cabbie - A Review Of The Canadian Comedy Film 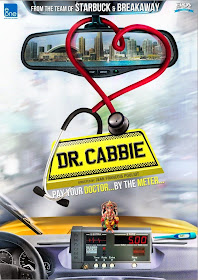 When I saw the title and read the synopsis, the first thing that came to my mind was an image of a Bollywood film added with Canadian twist to it. However to my surprise, not only Dr. Cabbie was a funny and loving comedy, it also touches on social issues and life challenges that relate to many Canadian immigrants.

The story talks about a new med school graduate from India, Deepak (played by Vinay Virmani), has plans to set foot in Canada to become a doctor, but shortly arriving to the country he realizes that dreams and reality are much further apart than expected.

Having difficulties finding a position as a doctor at the hospital, Deepak unwillingly works for his uncle at his Indian restaurant, and subsequently becomes a cab driver through a referral of his friend Tony (played by Kunal Nayyar).

A twist of fate occurs when he coincidentally meets a young beautiful woman named Natalie (played by Adrianne Palicki) who eventually he helps delivering her baby in his cab out of emergency. Soon the news about Deepak, the “cab doctor” and his heroic act at the back of the seats spread. His “popularity” granted him the title “Dr. Cabbie and people from all walks of life come for his medical advice. This allows him to continue his passion to cure the sick.

When things seem to go well for Deepak, a dramatic event has caused him running into trouble with the law, and is on the verge of being deported back to India. I am not going to spoil you with all the details of what happens in the end, but I have to say that Dr. Cabbie deserves a celebration.

Personally I think that Dr. Cabbie is a well-written and well-directed film, the jokes are dead-on and relevant, and the cast is fantastic with the right character development. The movie definitely is not a typical Bollywood style film – but rather a modern comedy that offers a subtle Bollywood twist.

Aside from being a heart-warming and a witty comedy movie, Dr. Cabbie actually digs deeper into social issues - It speaks the minds of many immigrants who came to Canada for a better life, and yet their credentials for work are not accepted. Without much support, they are forced to take  “lesser desirable” jobs earning only substantial amount of money for living. It touches my heart since I know that some of my friends from Asia (ie: doctors, engineers, and lawyers) who comes to Canada for work but ends up with positions as dishwashers, servers and school janitors. They are all unable to live the life they initially hope for.

Another aspect that makes me really enjoyed Dr. Cabbie was the focus on the family topic. It’s refreshing to see a change from all the recent superhero movies, and showing how saving one’s life doesn’t necessarily mean you need special powers., The fact that Dr. Cabbie’s family stands behind him no matter what brings in very powerful and inspiring emotions. Overall, if I had to give up to five stars for this movie, Dr. Cabbie deserves a 4.5/5 in my book.

Dr. Cabbie opens in theatres on September 19th.  I would recommend this film to those that are in the midst of going through troubling times in life, and need something to up-lift their spirits, and give them the encouragement and hope to over come the challenge.